It’s been a frantic start to 2017 here at YWAM Kona. Paul continues in his primary roles of training in areas of stewardship, finances and outreach.

Paul is again serving as part-time staff of the Justice DTS at YWAM Ships, with his long-time friend Sean Murphy as school leader. Paul supervises the school finances, and gives oversight to the team outreach budgets. It’s been another excellent school to be involved with, with amazing students and staff. Teams are leaving in the next 2 weeks and heading to Cambodia, Cameroon, Haiti, PNG, Mexico and Vanuatu.

Speaking of YWAM Ships, our twin ministry here in Kona just got given a new boat, valued at $11M. This vessel will serve YWAM’s ministry in Papua New Guinea. You can read more about this here: https://ywamships.net/lastrolabe-set-join-ywam-ships-fleet/

There have been numerous groups meeting at YWAM Kona over the past month. The U of N Advisory Board, the Board of Regents, as well as the Board of Trustees have all had their gatherings in Kona. Part of that group of people was John & Sam Hudson, who lead a ministry based in Montana called 100 Fold Studios. 100 Fold is responsible for designing the new U of N campus in Battambang, Cambodia. We met John and Sam 20 years ago during our YWAM DTS in 1997, and had not seen them since. It was so great to catch up with them, and Lynnette will see them again this Summer in Cambodia.

Count down till Cambodia Outreach

Speaking of Cambodia, Lynnette and Austin leave for their 4 week long outreach to Battambang on June 4. 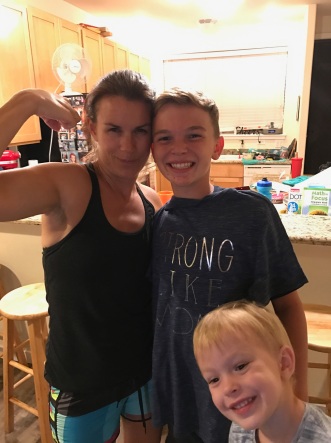 They are super excited to go! Their tickets have been purchased. Now, we are raising funds for their ground costs. Lynnette and Austin will serve alongside the U of N in Battambang, partnering with their ministry, and also serve at Cafe Eden, which is a ministry birthed from the U of N, and run by a friend of ours, Anna Milligan, who was sent out from YWAM Kona in 2005.

It’s March in Kona, which means it’s “visitor season”! 2017 is no exception. Paul’s family will be coming – they start arriving today actually – for 3 weeks. It will be the first time the whole family has been together since 2010! We are so excited for this time to be with family! We also have dear friends here from England. We met Shane & Christina in 2004 when they did their DTS in Kona. It’s the first time we’ve seen them since 2011 when they visited us in Washington.

Pic of the last time the family was all together – April 2010, in Auckland NZ. So, pre-Tre and pre Paul’s siblings having kids of their own.

Pic with Shane and Christina on the Kona Campus – March 17

In mid-April, Paul will join the campus Finance working group. This is a logical move for Paul, who already gives oversight to finances with campus schools. This new team deals more with broader campus operational finances.

Want to do an outreach this summer?

Outreaches to 4 locations are happening this summer through Fire & Fragrance Kona. You do not have to have completed a DTS to go on these outreaches. They are filling up fast. For more info, go to: www.fireandfragrance.com/gonow.

We trust that you are doing well, and would love to hear from you. Send us an email or a text, and let us know how we can pray for you!